Create an Account - Increase your productivity, customize your experience, and engage in information you care about.

The Wicoff House Museum is open for tours on Sundays from 1-4pm, and during the week by appointment. Contact the museum to make an appointment or for a large group tour: museum@plainsboronj.com.

To stay up to date on all information and events visit the official Wicoff House website: https://wicoffhouseplainsboro.com/

HISTORY OF THE WICOFF HOUSE

Built around 1880, the Wicoff House was first home to John and Catherine Wicoff. It was constructed on land owned by Catherine that she had purchased from the estate of her father, Colonel Dean Britton. In 1878, their only child, John Van Buren Wicoff, was born on the property, possibly in this house.

John Wicoff farmed the 150 acres surrounding the house and worked as a wholesale merchant of farm crops such as wheat and potatoes. In 1892, when his son was fourteen years old, John died suddenly. His wife Catherine hired a farmer to take over the operation of the farm. The farmer’s family moved into the Wicoff House, which was divided into living spaces for the farmer’s family and for the Wicoff family.

In 1900, John V. B. Wicoff graduated from Princeton University and then studied law at New York Law School before joining a law firm in Trenton. In 1904, he married Lavinia Applegate and in 1908, they moved into the Wicoff House. A new house was built on the property for the resident farmer and the two wings of the Wicoff House were shared between John and Lavinia and his mother Catherine. Several modifications were made to the house at this time, including the installation of central heating and the construction of a new kitchen. 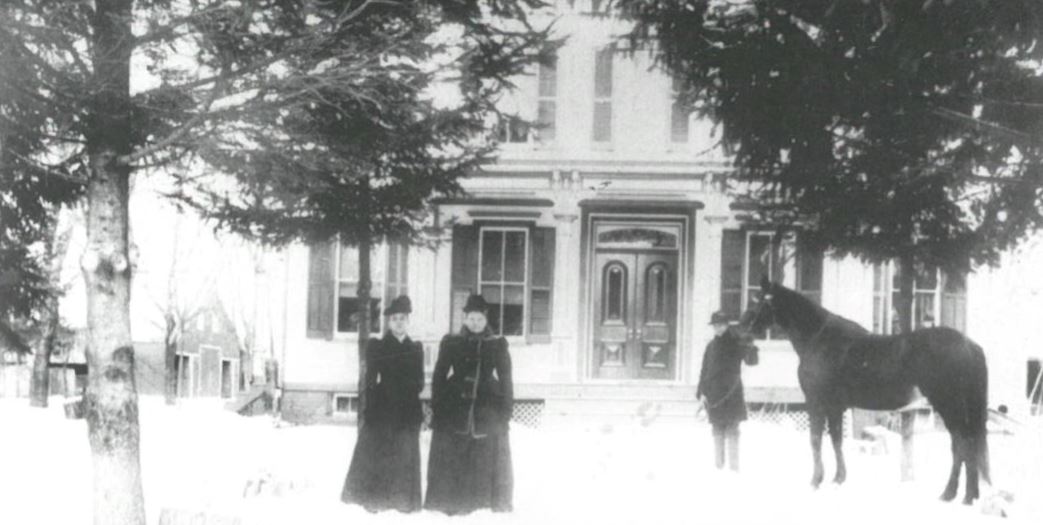 While John remained involved in the management of the farm, he worked as a prominent lawyer in the Trenton area for most of his professional career. He became the President of the Broad Street National Bank of Trenton and a 1936 Republican candidate for the New Jersey State Senate. (He lost). In 1919, he was one of several prominent residents who successfully petitioned the New Jersey Legislature for the formation of a new town. On May 6, 1919 their efforts resulted in the formation of the Township of Plainsboro.  Wicoff served as the mayor of Plainsboro from 1922 until his death.  Along with two other men, he established the town’s first telephone company in 1899.  To honor his contributions to the founding and growth of Plainsboro, in 1975 the first school built by the Township of Plainsboro was renamed the J. V. B. Wicoff School.

John and Lavinia raised seven children in the Wicoff House. His mother Catherine lived in the house until her death in 1928. At that time, the house was remodeled again, with the installation of public electricity and the addition of a new wing which included a sunroom (with a tile floor made by the Mueller Tile Company of Trenton). John also expanded the private grounds around the house, adding a tennis court, formal flower gardens, two grape arbors, an apple orchard, a vegetable garden, many trees and a large garage.

In 1952, John V. B. Wicoff died after living nearly his entire life in this house. His wife Lavinia lived here until her death in 1958. Over the next two decades, the house was rented to a series of tenants and suffered from neglect. In 1977, the Wicoff House was acquired by the Township of Plainsboro and used for municipal offices until the construction of the first municipal building in 1993.

From 1995 to 2011, the Plainsboro Historical Society operated a museum inside the Wicoff House. In 1998, the John Van Buren Wicoff House was listed in both the New Jersey and National Registers of Historic Places. When the historical society disbanded in 2011, their collections were deeded to the Township. Soon after, the Township began to hire consultants to organize and catalog the collections, and to prepare for the eventual re-opening of the museum.

With the help of preservation grant funding from the New Jersey Historic Trust and Middlesex County, the Township of Plainsboro undertook the restoration of the house. In conjunction with the 100th anniversary of the founding of Plainsboro, the Plainsboro Museum, housed once more inside the Wicoff House, was re-opened to the public on May 11, 2019.

To stay up to date on all information and events visit the official Wicoff House website: https://wicoffhouseplainsboro.com/